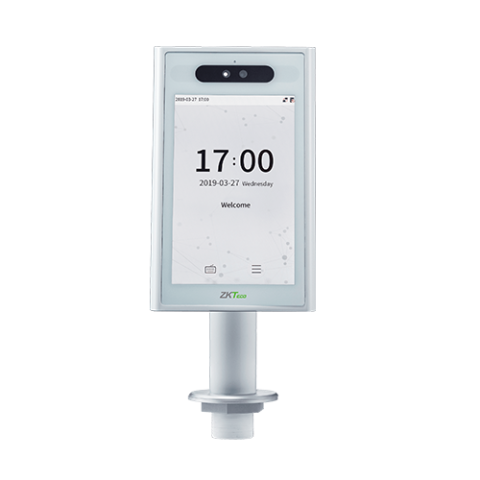 Elite Pass is a highly efficient and corrosion-resisitant facial recognition terminal adopting deep learning algorithm that can be installed on and is compatible with entrance products such as flap barriers, swing barriers, tripod turnstiles of ZKTeco and the third parties to be used under exterior and interior environments with different levels of salinity and humidity such as industrial and coastal areas.

With a provided pan-tilt bracket, users may adjust the direction and angle of this biometric terminal as desired to authenticate turnstile users of different height within 3 meters away from the access point, which must boost your existing security system.

Elite Pass is equipped with a 2MP starlight CMOS sensor camera with WDR function, which enables the terminal to recognize faces under extreme lighting conditions (from 0.5lux to 50,000lux), and a microwave detector which precisely detects the distance between a user and the device, then wakes the terminal to start verifying the user’s identity, which certainly takes the pressure off your security team.

Apart from that, Elite Pass is powered by the latest facial recognition algorithm and ZKTeco’s customized CPU for running the intellectualized engineering facial recognition algorithm. Together with the ultra-large capacity of up to 50,000 facial templates, Elite Pass offers unrivaled matching speed (less than 0.3 second per face) with strong anti-spoofing capability against almost all kinds of print and video attacks.

We use cookies on our website to give you the most relevant experience by remembering your preferences and repeat visits. By clicking “Accept All”, you consent to the use of ALL the cookies. However, you may visit "Cookie Settings" to provide a controlled consent.
Cookie SettingsAccept All
Manage consent

This website uses cookies to improve your experience while you navigate through the website. Out of these, the cookies that are categorized as necessary are stored on your browser as they are essential for the working of basic functionalities of the website. We also use third-party cookies that help us analyze and understand how you use this website. These cookies will be stored in your browser only with your consent. You also have the option to opt-out of these cookies. But opting out of some of these cookies may affect your browsing experience.
Necessary Always Enabled
Necessary cookies are absolutely essential for the website to function properly. These cookies ensure basic functionalities and security features of the website, anonymously.
Functional
Functional cookies help to perform certain functionalities like sharing the content of the website on social media platforms, collect feedbacks, and other third-party features.
Performance
Performance cookies are used to understand and analyze the key performance indexes of the website which helps in delivering a better user experience for the visitors.
Analytics
Analytical cookies are used to understand how visitors interact with the website. These cookies help provide information on metrics the number of visitors, bounce rate, traffic source, etc.
Advertisement
Advertisement cookies are used to provide visitors with relevant ads and marketing campaigns. These cookies track visitors across websites and collect information to provide customized ads.
Others
Other uncategorized cookies are those that are being analyzed and have not been classified into a category as yet.
SAVE & ACCEPT